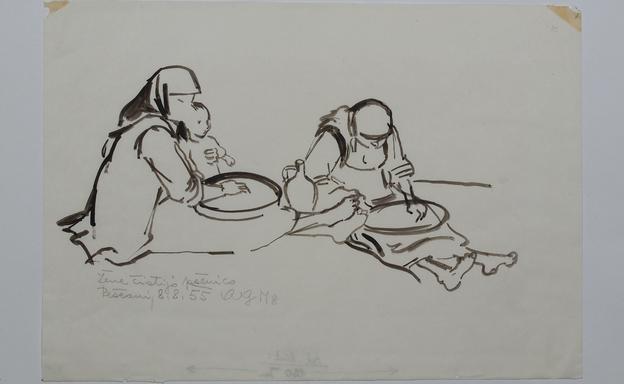 The artistic world of Alenka Gerlovič. The Macedonian Cycle at the Slovene Ethnographic Museum

The year 2019 marks the centenary of the birth of the academy trained painter Alenka Gerlovič. Her works are kept by numerous institutions, while six of them are part of the year-long project The Artistic World of Alenka Gerlovič (1919-2010), initiated by the Association of Societies of Slovene Artists. The Slovene Ethnographic Museum (SEM) is contributing the artist’s Macedonian Cycle.

In the spring of 2003, Alenka Gerlovič donated to the SEM some of her drawings and paintings created in Macedonia between 1953 and 1957, when she used several consecutive summers to observe and depict life in Prilep, Skopje, Ohrid and the surrounding villages. The donation comprises 90 drawings in various formats and techniques (brown, black and red chalk, reed/ink, pen/ink, paintbrush/ink and pencil) and 10 watercolours.

The artist wrote about her painting and drawing oeuvre and the circumstances in which it was created in the catalogue Alenka Gerlovič: Drawings from Macedonia 1953-1957 that accompanyied an exhibition on her 80th birthday, published in 1999 by Galerija Ilirija in Ljubljana. The watercolours are refined and deeply felt artist’s impressions, whilst the numerous drawings present skilfully noted ideas brought by the experience of the rich countryside and archaic life during her visits to Macedonia “during those long-gone times, when the world was still big and its wonders almost unreachable. I wanted to see, experience and paint the remote country of my longing. That was Macedonia”, she wrote. She had expected to be impressed mostly by the magnificent landscape, which is always present in her oeuvre, but instead she was particularly struck by figural motifs, particularly the buffalo and people going about their everyday tasks: women in their vivid costumes on market day in Prilep, the activities at the food and livestock market, the Roma and their colourful homes, threshing wheat, washerwomen with their skirts tucked-up along Lake Ohrid, the female pilgrims at St Clement’s Church in Ohrid, as well as the architecture. The drawings and paintings are usually well documented, which means that at the edge are the artist’s initials AG, the place, date and year the painting or drawing was created, sometimes even a short description. The artist’s watercolours and drawings from the Macedonian cycle are not only artistically important but also a unique source for studying life in Macedonia in the Fifties.

With regard to the ethnological testimony of the drawings and paintings, the artist’s black and white photographic records from 1955 deserve a special mention; they were also donated to the SEM in 2003 by the artist, together with five films. All the photographs are carefully documented on their reverse side.