The Curatorial Department of Folk Art and Pictorial Resources of the Slovene Ethnographic Museum houses a collection of paintings on glass, which currently consists of 633 items.

The concept of the collection is characterised by items already acquired in the period of the Carniolan Provincial Museum and incorporated into the newly established or emancipated Slovene Ethnographic Museum (1923) following the partitioning of collections. The collection was then supplemented with objects discovered in research field work, with donations from individuals and purchases from collectors or antique dealers. Despite the large size of the collection, we also include new specimens which are testimonials, especially from the point of view of their collectors or current creators.  From this perspective, an important acquisition was the collection of paintings on glass by Breda Železnik (married name Svetlič) from 2019, in which her works are predominant.

Paintings on glass were extremely popular in Slovenian farmhouses in the first half of the 19th century. They had their place in God’s corner near the crucifix above the large family table, with these items collected in »hiša« that was the central living place. They contributed to shaping the artistic taste and creating the perception of painting among the majority of the population. In the early 20th century, lithographs with religious content began displacing paintings on glass, causing them to disappear from everyday use, and at the same time arousing a gradual growth of interest from collectors.

Most of these colourful paintings came to the Slovenian ethnic territory from rural painting workshops in Bavaria, from Pohoři in the Upper Palatine Forest and from Sandl in Upper Austria. They were brought by pedlars, while farmers bought them on pilgrimages and at church fairs. At the time of their import and under this influence, paintings on glass were also created in Slovenia. By analogy and given the stylistic expression on painted beehive panels, about 12 percent of the recorded paintings on glass have been attributed to the Selca workshop from Selca in the Selca Valley, and the two painters called the Master of inept drawings and the Master of small figures. The SEM collection keeps 62 paintings from the workshop in Selca, 17 from the Master of small figures and 13 from the Master of inept drawings. The literature also mentions the Tribuče Čepovan Glassworks and makers in the Kočevje region, but their products have not been identified.

Given the process of painting, it would be more accurate to name such works odzadnja slika na steklo, which corresponds to the translation of the German word Hinterglasbild and the English reverse painting on glass. The process of painting took place in such a way that the painter first painted the outlines of the motif on the glass with an otter or mink hair brush according to the submitted template. To paint lighter colour layers, the outlines of lighter colours (e.g., for faces, bodies, flowers) were first painted, with darker contours added for darker colour layers (dark dresses, hair, trees). Colour layers were painted with oil paints that were a mixture of pigments, water and oil. Painting smaller colour groups was followed by painting the background with white, blue or yellow.
Different types of glass paintings were widespread in Slovenia. They may have been painted only with colours, or painted and gilded, or they may have included cut and gilded details and a black background, or even used a mirror as a background.  Depending on the shape they may have been free of additional design elements, but come with a white inscription box or a cartouche.
The motif is almost exclusively religious, most often depicting Jesus or Mary in various iconographic versions. They are followed by motifs showing the Holy Trinity, the Sacred Heart, the Tomb of God, St. Barbara, the Holy Family, the Last Supper, St. Lenart, St. Florian, a scene from the legend of St. Genevieve, St. Joseph, St. John Nepomuk, St. John the Baptist, St. George, St. Anthony the Great, St. Anne with Mary, St. Catherine, St. Magdalena, St. Margareta and the Three Holy Kings.

On 18 May 2021, the General Assembly of the United Nations, in response to an initiative from the International Commission on Glass (ICG), the ICOM-Glass and the Community of Glass Associations (CGA), declared 2022 as the International Year of Glass. The more than 1100 supporters of the initiative from 74 countries includes Slovenia, which is contributing the project Along the Glass Trail, where the museums are presenting selected glass objects from their collections. 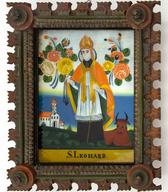 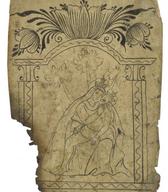