From home to Jerusalem, temporary exhibition by SEM

What
SEM Temporary Exhibitions
From
TO

The exhibition presents a selection from the digital archive of photographs from the rich legacy of the master brush-maker Peter Naglič from Šmarca near Kamnik. This archive is a precious new museum acquisition. The photographs taken by Naglič from the late 19th century to the late 1950s show various events in his personal life and the life of the local community. They also speak of his pilgrimages from his home in Šmarca to places far and near, at home and abroad. In this anniversary year of the Slovene Ethnographic Museum we also celebrate the 130th anniversary of Naglič's birth. 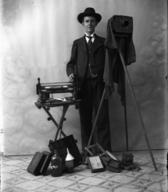