In 2012, in Italy a group of activist women, members of the photography association FOTOGRAFAREDONNA put together the project called Femminilereale.  The project addressed the question of public images of women and pointed to the gap between the actual, real women and the ideals of femininity and womanhood in media, advertising and other public spaces. The three stage project was based on juxtaposing images of women in advertisements in a specific urban space and the photographs of women of different age group, social background and origin living in that same urban space. A selection of photographs was, as a public art intervention, then displayed on buses in the spaces that are usually reserved for commercial images of women's bodies.

In September 2013, Femminilereale travels to Slovenia to make its next stop in Ljubljana.

While for decades, feminist scholars have been warning of the negative social consequences that such idealized representations have on women's self-understanding and their place in society, the mass media, fashion and beauty industries continue to be involved in the production of what Naomi Wolf has called the »beauty myth«. However, in contrast to early days of the beauty myth, whose main contribution was the shift from the engaged feminist politics to the depoliticised, postfeminist construction of the (post)modern woman as a sexualized body, in more recent years, the social, demographic and political consequences of this production of the perfect woman's body have changed dramatically. This has been most evident in the rise of the mass cosmetic surgeries in various parts of the world (the widespread »correction” of the jaws and eyelids among young Asian women!); in open, public testimonies of celebrities presenting their face, breast and other body parts fixing as a desirable procedure for any woman; and in a whole new globalized iconography of ideal body images based on the marketing of beauty as a health and moral responsibility issue.

Femminilereale acknowledges the well researched history of the beauty myth industry since the 1970s and 1980s as well as the critical feminist response to its controversial impact on real women's lives. In its effort to contribute to this critical issue, the project takes a step further  travelling to the next stage of feminist investigation in which idealized images are observed in concrete social and cultural spaces; and in the cross-border contexts of the South-eastern region of Italy and Slovenia.

Femminilereale started in Trieste. In Ljubljana, the Trieste group will be joined by three scholars and researchers from Slovenia who will illustrate the culture of representation of women after the break-up of Yugoslavia (and the post-World War II history of the socialist paradigm of womanhood); and in the context of the postsocialist shift to consumerism. In this way, the project is turning into a travelling caravan of critical inspection of public culture as regards the representation of women in two neighbouring countries.

The goal is to continue this inspection in other urban centres of former Yugoslavia analysing their  shift  to the objectification and marketization of women's bodies.

Femminilereale aims at paving public ground for an alternative production of images of women in which beauty is a cultural derivate of dignity, respect and inspiration, fuelled to  humankind by exceptional and ordinary – but always real – women. 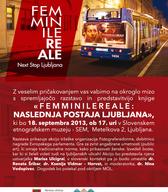 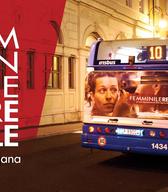