The Magic of Amulets

Man has long believed in supernatural powers, in deities, in demons and other mysterious beings that influence his life from birth to death.

The Ancient Egyptians incorporated the influence of unknown forces into their belief in an eternal life and so as early as five thousand years ago had a method by which individuals could protect themselves against danger in everyday life and on the journey to eternity. They made use of small objects that had been blessed in a temple and possessed magic power under the aegis of the relevant god or goddess. These were amulets, made in the form of various deities, demigods, sacred animals and objects that protected the living and the dead. They were also used as votive offerings to the gods in temples. Amulets are intermediaries between man and unknown, supernatural forces. They are a medium that brings a feeling of safety in the face of the unseen touch and proximity of a mysterious deity. Thus in everyday life and the cult of the afterlife the magic of amulets played an extremely important role, leaving visible traces not only in the Egyptian cultural heritage, but also influencing other African and Mediterranean cultures, as well as European spiritual traditions.

The exhibition The Magic of Amulets by author and curator dr. Marko Frelih presents the tradition of magic amulets from the times of the Pharaohs onwards, with an emphasis on the collection of Egyptian amulets held by the Slovene Ethnographic Museum, which were brought home by Slovene collectors in the 19th century. In addition, it features amulets from the Ptuj-Ormož Regional Museum and the Carinthian Regional Museum. The millennia-old tradition of using objects with magical protective power against danger and mysterious forces has also left traces in contemporary Egypt, as is shown at the exhibition by a private collection Shahira Mehrez of Islamic women’s jewellery of silver and other materials.

In different cultures amulets mediate the invisible power of words, images, looks and touch. In the exhibition, the power of words is illustrated by the Slovene Ethnographic Museum's collection of talismans written in Arabic and the borrowed ALEP collection from the Paris Museum d'Historie Naturelle. Talismans, a kind of magical text involving a combination of letters, squares, numbers and geometric figures makes use of fragments from the Quran. They are employed for protection against demons and accidents, and are present in Africa and the Islamic world. For the exhibition The Magic of Amulets the talismans from the Slovene Ethnographic Museum collection have been studied, interpreted and translated from Old Arabic by the scholars Dr Constant Hamès and Dr Živa Vesel from the National Centre for Scientific Research (CNRS) in Paris.

The Magic of Amulets highlights the lengthy genesis of the amulet as a magic object, the transformation of its design and the continuity of the mission that Ancient Egyptian influence bequeathed to African, Mediterranean and European spiritual traditions.

The exhibition story starts with Pharaoh Tutankhamen (1300 BC) because his excellently preserved tomb offers an illuminating view of the attitude of the Egyptians to amulets and everything related to them in the sense of protection against the destructive forces of evil. It illustrates the culture of ancient Egypt, when people considered their earthly life as but an overture to eternity. By reciting sacred texts and using consecrated objects - amulets - they navigated the dangerous obstacles of the dark underworld and carefully prepared themselves for life after death.

The Egyptian amulets exhibited in the first room were added to the grave of a deceased person during mummification. The Isis amulet is one of the most interesting in the exhibition as she was the goddess of the Earth, mistress of all the elements, and her mission was to ensure fertility and protect their offspring. Her cult influenced different Mediterranean cultures and left traces both in African and in the European spiritual traditions.

Man has decorated his body for the sake of beauty and magical protection against unknown forces for millennia. This is why the second exhibition room presents objects for the protection of the body, clothes, Islamic and African jewellery. The Islamic women's jewellery from the collection of Shahira Mehrez, Cairo, perfectly illustrates the interplay of aesthetic aspects with the traditional knowledge and use of symbols that is rooted in the ancient treasury of Egyptian magic. The exhibited ostrich egg, on the other hand, is a symbol of incarnate divine power, from which life on Earth sprang, and it appears, in different forms, in all cultures as a symbol with supernatural properties.

Amulets were used as a medium as well in different cultures, conveying the invisible power of words, images, touches, and looks. The “power of words” is illustrated in the third room by the collection of talismans of the Slovene Ethnographic Museum, written in Arabic, and the ALEP Collection on loan from the National Museum of Natural History in Paris. The talismans, magical slips of paper with inscriptions featuring combinations of letters, squares, numbers, and geometric figures, contain fragments from the Quran. They are used for protection against demons and misfortunes and are known in both the African and Muslim worlds. The “power of images” is presented with miniature statuettes, saint medals, crosses, holy cards, and other objects that protect and bring hope and peace. Through Horus's eye – the eye of a deity – the “power of looking” represents the absolute power of control that protects and destroys. In Mediterranean cultures it was transformed into blue-white glass pendants and in Christianity into a divine triangle with the all-seeing eye. The “power of touch” was innate to a holy person or object, by touching the supernatural power was transferred, creating invisible protection. This section includes amulets with cowrie shells, symbols of fertility, used as decorations for ritual masks, pieces of clothing, and jewellery above all in Africa.

The exhibition story ends with the spiral, one of the oldest symbols in the world, symbolizing the universal dynamics of the endless interplay of life and death.

The exhibition The Magic of Amulets was prepared by the Slovene Ethnographic Museum, represented by dr. Bojana Rogelj Škafar

Acknowledgment
The exhibited Islamic female jewellery from the private collection Shahira Mehrez, Cairo, is a tribute to the late Dr Carla Maria Burri, former director of the Italian Cultural Institute in Cairo and in Ljubljana who was closely associated with the Slovene Ethnographic Museum for many years. 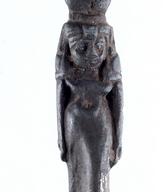