The exhibition SUDAN MISSION 1848-1858 Ignacij Knoblehar – missionary, explorer of the White Nile and collector of African objects is a continuation of the Slovene Ethnographic Museum’s systematic presentation of its African collections.

The exhibited objects are among the oldest African collections in Europe of objects from the Nilotic tribes. They were collected by the Slovene missionary Ignacij Knoblehar and brought to Ljubljana in 1850. Knoblehar’s collection reflects the material and spiritual culture of various peoples that in the mid-19th lived century along the White Nile in the Southern part of the present day Sudan. Among the exhibited objects, the most striking are the jewellery, various amulets, unusual weapons and interesting objects for every day use. The objects and rare archive materials document Knoblehar’s interest in African cultures, whilst at the same time providing information about his exploration of the River Nile, in which he played a pioneering role. He was the first explorer to systematically describe the river as far as 4 degrees latitude north. Notes on his findings were published in various European newspapers and served as an important resource for further research, even though after his death they mysteriously disappeared.

Ignacij Knoblehar (1819 - 1858) was born in Škocjan in the Dolenjska region. After studying theology in Rome he travelled to Alexandria and in 1849 became the head of the Central African vicariate that encompassed 16 million square kilometres of territory in North East Africa. The mission’s centre was Khartoum, a city lying at the confluence of the White and the Blue Niles, which had a reputation as a gathering place of slave and ivory hunters. Knoblehar and his colleagues focused their missionary activities on the fight against slavery and on spreading Christianity among the people living along the White Nile. He enjoyed strong support in his homeland and for nearly a decade newspapers regularly published news from the mission. During that time a large number of children travelled from Africa to Ljubljana to be educated in monasteries for missionary work.

The exhibition is an important contribution to the study of the history of the first contacts between Europeans and the tribes living along the White Nile in equatorial Africa. 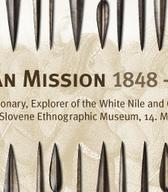