Cockta, the drink from our younger days. The heritage of Slovene brands 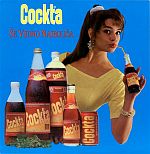 The Slovene Ethnographic Museum for the heritage and future of national brands – a step towards a marketing museum.

Following an initiative from the Slovene Marketing Association, the Slovene Ethnographic Museum has created the exhibition Cockta the drink from our younger days. The heritage of Slovene brands. This initiative arose from the idea of a marketing museum of successful Slovene brands, which are an important part of Slovenia's economic and cultural heritage.

The aim of the exhibition is to connect the material and intangible cultural heritage relating to brands with their role in the way of life and culture, with the level of economic development, consumerism, the form of advertising used and its role, the development of marketing and what is available on the market.

In view of the fact that the turbulent economic changes at the recent turn of the century nearly destroyed many Slovene brands, there arose a need among marketing experts to protect and preserve them. This task should, in the opinion of the Slovene Marketing Association, be achieved by collecting materials on brands which would serve as the foundation for the establishment of a marketing museum that would make an important contribution to the understanding of the development of marketing and consumer culture in the Slovene context. This would mean that brands became one of the components of the national identity held in museums.

The exhibition focuses in particular on the phenomenon of Cockta and clarifies why brands are necessary. Cockta is a symbol of the Slovene consumer revolution and the most characteristic representative of the 'Slovene brand'. Its role in our economic and social development is not in dispute. Thus research into the history of Slovene brands and the exhibition Cockta, the drink from our younger days are above all an expression of respect towards all those who created and developed Cockta and the other brands that became part of our cultural identity and which are a pleasant reminder of a time when our society and economy flourished. As a step in the journey towards a marketing museum, the Cockta exhibition is a harbinger of youth and fresh new ideas for preserving the heritage of Slovene brands, as well as their future.

The exhibition also presents selected examples of well-known Slovene brands, almost all of which survived the economic and other changes of the 20th century and left their mark on the economic history of brands. Their roots can be found in the heritage of regional craft and industrial products. This includes the companies Pivovarna Laško, Radenska, Kolinska / Droga Kolinska, and the factories Emo Celje, Peko, Ilirija, Gorenje, Šumi and Elan.

Cockta, the drink from our younger days

A contemporary Slovene legend
The Cockta brand has played a special role in the development of marketing in Slovenia from its very beginnings in the early 1950s, when the state dominated the economy. The promotion of Cockta introduced generations of Slovenes to the Western style of living and new forms of advertising. The sales results of Cockta reflect the economic conditions in the former Yugoslavia and the power of the Slovene economy in foreign markets. In 1994, an obituary was already written for the Cockta brand, but under a new owner, re-launched in a retro bottle, and with the support of extensive advertising Cockta made a successful comeback on the market. Its initial success can be explained with the concept of “pioneer brand advantage”, while its success after 2000 was in line with the retro trends in the market. An instrumental factor to the success of Cockta as well as other Slovene brands is the effect of "consumer ethnocentrism". Many Slovene brands from past periods managed to preserve their reputation and market share, and these represent the pride of the Slovene economy, because they are part of the national identity. But at the same time they are endangered by the transition, globalisation, and other changes in the market.
(Janez Damjan. From the exhibition catalogue Cockta, the drink from our younger days, SEM, 2010.)

The origin of Cockta
The Cockta story begins in 1952 when Ivan Deu, the Director of the company Slovenija vino, came back from America with a bottle of Coca-Cola in his suitcase and proposed that a similar drink should be produced for the domestic market. Beginning that same year and continuing the next, a secret formula was developed for the first carbonated soft drink in Yugoslavia. The credit for the recipe can be ascribed to Emerik Zelinka. In 1953, with its registry at the Federal Patent Office in Belgrade and the Patent Office in Bern, Cockta became a protected trade mark.
The name Cockta is connected to the word cocktail, as Cockta is made from a mixture of rosehip, lemon and a number of medicinal herbs. The derivative Cockta Cockta was modelled on the American Coca-Cola.

The maturing of the brand
In 1952, Sergej Pavlin, who was then a young architecture student, created the first bottle and label for Yugo Cockta, which was advertised as Cockta Cockta. He also produced a number of advertising products: packaging for the bottles, the design to be painted on delivery trucks, costumes with advertising for ski-jumpers in Planica, and so on. His proposal in 1952 for a poster depicting a Polar bear drinking Cockta was not accepted, but 40 years later, Coca Cola made a Polar bear its icon. The poster that did become famous and which is still recognised today was designed by Uroš Vagaja and show a suntanned girl with a pony tail, wearing a yellow t-shirt and drinking Cockta.

On the market for the first time: Planica 1953
Cockta was presented for the first time on 8 March 1953 at a ski-jumping competition in Planica, with a huge advertising campaign – hoardings showing Vagaja’s suntanned girl against a blue background, while female staff from Slovenija vino, dressed in overalls with the Cockta logo, distributed Cockta among the crowd: all the way from the railway station to the ski jump there were advertising stands with Cockta and the bottles of the drink were the main attraction.

Advertising
After Cockta’s success in Planica, Slovenija vino strengthened its advertising through a number of campaigns. One of them involved photographs of a Cockta seller with her metal basket on railway station platforms and of children drinking Cockta. In its newspaper, Slovenija vino advertised Cockta as a drink suitable for children, young people and all those who like soft drinks and advised hostelries to mix it with alcoholic beverages such as wine, beer, vermouth and rum. Cockta Cockta was sold in bars, hotels, restaurants, cafes, sports clubs, factory canteens, patisseries and shops selling dairy produce. In the late 1950s, a match factory in Dolac in Bosnia and Herzegovina created a series of match boxes with various witty motifs connected with Cockta, inviting people to drink it in any situation at any time of year.

The first market competitor: “Rogaška Cockta” 1953
After the appearance of Cockta on the market in 1952, the Rogaška Slatina factory created a copy of the Cockta bottle with the label Rogaška 1953 and filled it with a mixture of Cockta syrup and Rogaška Slatina mineral water. The experiment did not succeed; the only person benefiting from the mixture was the distiller Anderlič, who made brandy out of the spoilt liquid. There followed a dispute between the companies Slovenija vino and Rogaška Slatina, which was resolved at the National Political Arbitration court.

The development of the brand and its spread on the market
After Planica, in less than a year Slovenija vino sold 4 million bottles of Cockta. Customer numbers increased steeply and Slovenia vino opened a new filling plant that also produced the syrup. The market spread to licensed soda water sellers, who filled Cockta under the conditions defined in their licence agreement. This increased sales throughout the former Yugoslavia, where in 1967 there were already 90 licensed manufacturers, who filled over 75 million bottles a year. In 1963 a new filling plant for soft drinks was built in Belgrade. Some unlicensed soda water sellers also cheated and filled Cockta bottles with other drinks, similar to Cockta, and stuck on their own labels, such as Extra Cockta, Super Cockta, etc. On the basis of the protected trade mark and Cockta’s quality, Slovin (the former Slovenija vino) withdrew the license from many co-operators and redirected production to its own filling plants. This resulted in a fall in sales and production, which was also partly influenced by other carbonated drinks such as Coca-Cola and Schweppes, which in 1968 began to take over from Cockta, until then the only drink of this kind. Slovin made several attempts to increase sales. Cockta syrup was exported to Poland and the Netherlands; in 1974, Cockta gained a new European bottle (0.25 l) and the celebrated slogan: Cockta, the drink from our younger days.
At the 30th anniversary of Cockta, which was again celebrated in Planica, Slovin for the first time launched on the market a plastic bottle and with the Ski Association of Slovenia named the ski-jumping competition for younger competitors the Cockta Cup. The first tin of Cockta also appeared for the first time in Planica in 1988.

From 1991 onwards
After 1991 it seemed that Cockta would be pushed off the market and be forgotten (this was also predicted by some marketing experts) and in 2000 the trade mark was bought by the company Kolinska, which moved production and filling to Rogaška Slatina. In particular since 2005, when Droga merged with Kolinska, major changes occurred, resulting in another marketing success. The Cockta brand has since appeared at all the major sports events. 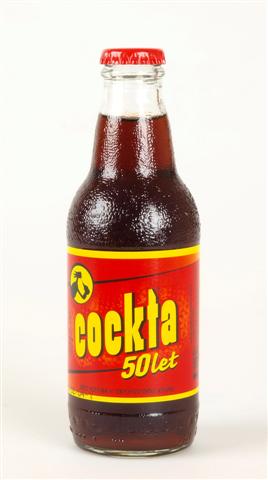 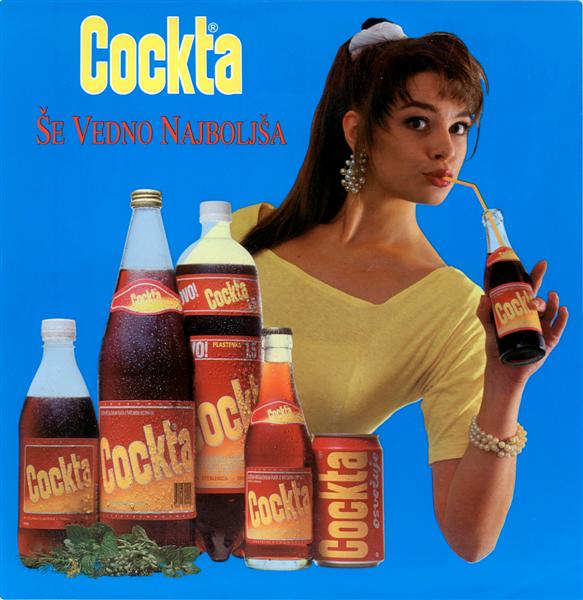 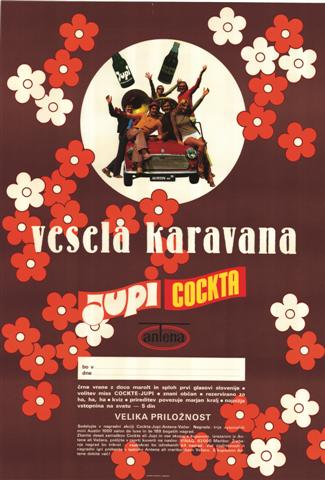 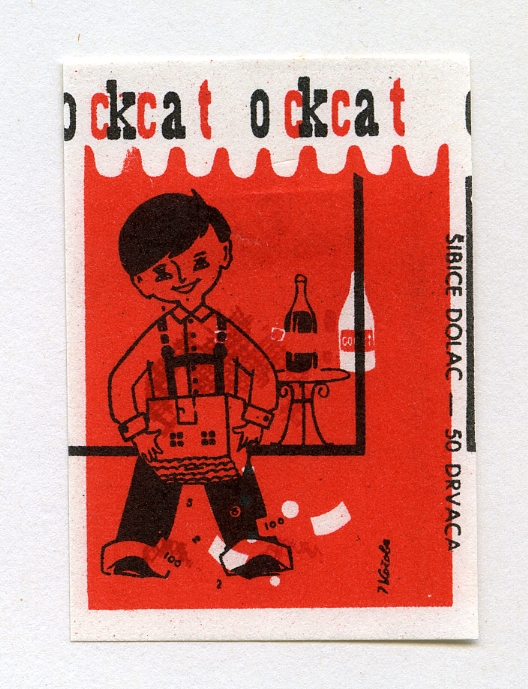 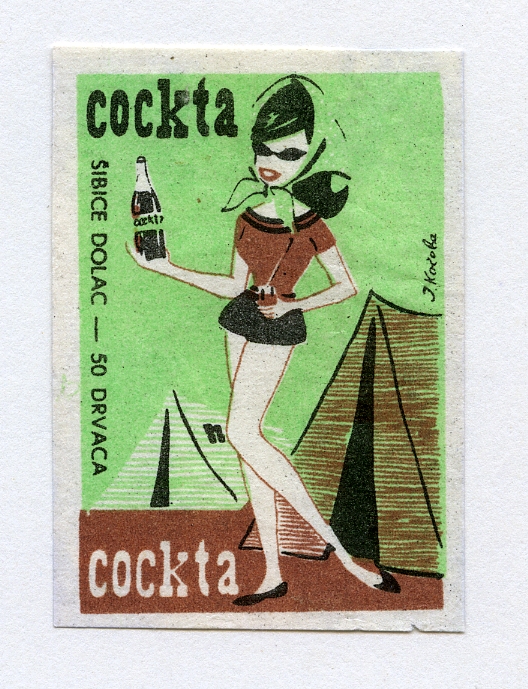 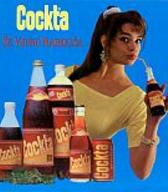 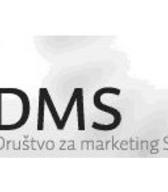 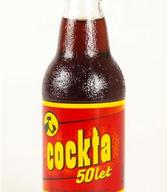 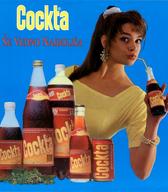 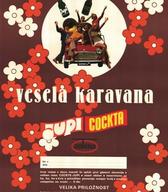 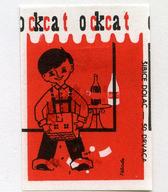 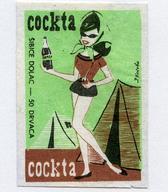